This article refers to the address: http://

The modern automobile industry and electronic technology are developing rapidly, and there are more and more electronic devices on automobiles. The number of electrical nodes in a high-end car has reached thousands. If the traditional method is used for wiring, the number of connections is very alarming and there are great hidden troubles. In order to solve this problem, major automobile manufacturers began research on vehicle networks in the 1970s, and have made great progress, forming a variety of network protocols suitable for different transmission rates and special purposes, such as: CAN bus , LIN bus, KWP2000 for diagnostics, TTP for X-by-wire, MOST protocol for multimedia applications, etc. Among them, CAN (Controller Area Network) was proposed by BOSCH in the 1980s. A serial data communication protocol developed to solve the data exchange between numerous control and test instruments in modern automobiles can solve the above problems well. Many car companies in the world, such as Mercedes-Benz, BMW, and Volkswagen, have adopted CAN bus to realize data communication inside the car.

China's research on vehicle network, bus and communication protocol started relatively late, but it has developed rapidly in recent years, especially in the electric vehicle project, the bus network has been widely used.

2 Technical characteristics of the car bus

The car bus transmission must ensure the following: ensure that the information can be transmitted accurately; the bus node can access the bus at any time; the node accesses the bus according to the predetermined priority; has the ability to resolve the bus access competition according to the information content and the competitive solution to the winning site The ability to access the bus and continue to transmit information; the node successfully accesses the bus in as short a time as possible; the optimal transfer rate (baud rate); the node's fault diagnosis capability; the bus has some scalability and so on.

The utility car LAN is a bus topology, such as CAN, SAEJ1850, ADVANCED PALMNET, etc. Its advantages are: short cable, easy wiring; simple bus structure, passive components, high reliability; easy to expand, only need to add new nodes Connect it at some point on the bus. If you need to increase the length, you can add an additional segment through the repeater.

The access protocol of the car bus is generally a contention protocol, and each node can independently determine the transmission of the information frame. If there are two or more nodes sending information at the same time, an error will occur, which requires each node to have the ability to determine whether a conflict has occurred. When a conflict occurs, it waits for a random time interval to resend according to a certain rule to avoid recurrence. conflict. The anti-collision monitoring measures used by the network protocol are mostly carrier-monitoring multiple access. For example, CAN, SAEJ1850, and ADVANCED PALMNET use carrier sense multiple access/collision detection + lossless arbitration (C***A/CD+NDA). ).

The CAN bus communication protocol was developed in the context of considering the industrial site environment. It uses three layers of the Open System Interconnection ISO-OSI model developed by the International Organization for Standardization ISO, namely the physical layer, the data link layer and the application layer. The CAN bus specification has been developed by the International Organization for Standardization as the international standard ISO11898 and is recognized as one of the most promising fieldbuses. It has been widely used in the industrial field. Supported by well-known semiconductor device manufacturers such as MOTOROLA, PHILIPS, Intel, and SIEMENS, and quickly introduced various products that integrate the CAN protocol. Compared with the general bus, the CAN bus has the advantages of reliability, flexibility and real-time performance.

(1) The CAN bus adopts a multi-master structure, and any node on the network can send information to other nodes at any time, and the communication mode is flexible.

(4) The CAN protocol abolishes the station address code, but encodes the communication data, which enables different nodes to receive the same data at the same time, which can conveniently realize the transmission and reception of point-to-point, point-to-multipoint and global broadcast. Data, which easily constitutes a redundant structure, increases system reliability and system flexibility.

(6) The short frame structure is adopted, the transmission time is short, and the probability of interference is low. Each frame of CAN has CRC verification and other error detection measures to ensure that the data error rate is extremely low.

(7) The communication medium can be twisted pair, coaxial cable or optical fiber, and the choice is flexible.

(8) The CAN node has an auto-shutdown output function in case of a serious error, so that the operation of other nodes on the bus is not affected.

The vehicle control system of a pure electric vehicle is composed of two buses, namely a high-speed CAN bus and a low-speed bus. The high speed CAN bus and low speed bus are two independent bus systems. In order to facilitate the management of all functions of the car, the two bus networks are connected through a gateway, and data between different buses is shared by the gateway. In this way, the two buses operate independently, and only the data that needs to be exchanged between the two buses is transmitted through the gateway. This approach separates different types of information, reducing the burden on each network bus. The high-speed CAN bus is mainly connected to the drive system of the electric vehicle. It consists of various subsystems of the drive system and fault analysis and recording system nodes, which can realize rapid control of key systems such as motor, battery, steering and braking.

The low-speed bus is mainly used to connect the body system. The connection object is mainly the joint assembly unit in the car, such as doors and windows, lighting, air conditioning, humidity sensor, central centralized control lock, etc., and accesses the high-speed CAN bus through the gateway as a subnet to form a A unified multi-network. Components in the body that are relatively close are connected to an ECU, and the status of the components and control signals can be communicated to the bus via the ECU connected to it. Each ECU is a self-contained system that controls the local actuator's actions based on local signals and signals on the bus, while transmitting signals shared with other nodes to the low-speed bus. At present, there are two types of low-speed buses that are widely used in automobiles. One is a low-speed CAN bus, which is a low-speed fault-tolerant CAN bus built in accordance with ISO 11519-2, J1939, and J2284. The other is the LIN bus, the Local Interconnect Network, which is established in accordance with the ISO 9141 standard [2] and can effectively support the control of distributed mechatronic nodes in automobiles. The LIN bus has the characteristics of low cost and high reliability. It can easily connect some components with sensitive components, such as smart sensors and comfort devices, into the automotive network, which is expected to become the mainstream of low-speed networks in automotive applications. 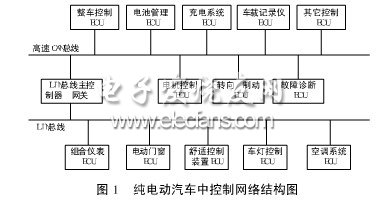 The vehicle control ECU is the center of the entire vehicle control. The driver's key signal, acceleration signal, and brake signal all enter the vehicle control ECU. The vehicle control ECU generates the operation signals of each node by analyzing these signals and comprehensively detecting the state of the sensors, and controls the commands through the CAN bus. Send to the corresponding node. The motor control ECU and the steering and brake ECU operate the vehicle according to the requirements according to the control command of the vehicle control ECU. The fault diagnosis ECU is also set on the high-speed CAN bus, which is responsible for the diagnosis and storage of the vehicle fault information, and controls the fault signal display. It can also communicate with the external fault diagnosis system through the wireless communication system. In addition, a high-speed CAN bus is equipped with a vehicle-mounted recorder, which functions like a "black box" for aircraft, and is used to record driving data and analyze and record the operation of the vehicle system. The low speed bus of the control network uses the LIN bus. The LIN bus is a single-master node and a group of slave nodes. The main controller is the master station. The other body systems are slaves. The main controller acts as the gateway for the LIN bus and the high-speed CAN bus. Into a unified network, so that all ECUs are hung on the bus, greatly simplifying the wiring of the vehicle's internal control system, simplifying wiring, improving system reliability and maintainability, reducing costs, and better coordinating the various controllers. The purpose of the system.

With the wide application of car multimedia in vehicles, GPS, telephone, stereo, TV, DVD and other systems enter the car, these devices need frequent communication, and the amount of information is huge, CAN bus or J1850 bus can not meet these devices Communication requirements, because the transmission of geographic information (GI), digital audio information or vehicle location information requires at least 5Mbps network speed, so a new type of bus IDB-1394 appears, which can support 100, 200, 400Mbps communication speed, completely Can meet the network needs of high-speed communication.

The CAN bus is a control strategy bus that mainly controls the vehicle itself, while the IDB-1394 bus is aimed at the interaction and sharing of multimedia information. In order to optimize the overall performance of the vehicle body and realize the flow of information between the CAN bus and the IDB-1394 bus, adding a gateway between the two buses can realize the integration of the body bus network, thereby realizing the integrated bus control of the vehicle body.

5 China's focus on CAN bus research and key technical issues

With the rapid development of automotive technology, the automotive bus technology, which has great application prospects, will be developed faster and more widely.