Gallium nitride-based wide bandgap semiconductors have been widely used to prepare high-brightness blue, green, and white light-emitting diodes (LEDs), blue lasers (LDs), high-temperature, high-power field-effect transistors, and ultraviolet light sensors. Many new effects and devices are also being discovered, such as GaN-based dilute magnetic semiconductors and spintronic devices. In the past 20 years, nitride semiconductor materials and devices have been widely concerned in the fields of scientific research and production, and have rapidly developed into the focus of fierce competition in high-tech fields. They are called third-generation semiconductor technologies.

Among them, a particularly noteworthy development direction is white LEDs, whose main application is that as an illumination source it is possible to replace or partially replace incandescent lamps and fluorescent lamps that are currently widely used. It can be said with certainty that white LEDs, like Edison incandescent lamps, will cause a revolution in the lighting industry, the replacement of lighting methods, and will drive a large number of related industries to develop rapidly. It is expected that this process will replace existing lighting technologies to varying degrees in 5-10 years. Obviously, this is a major event that affects the national economy and the people's livelihood. It involves thousands of households and is considered to be the biggest business opportunity in the 21st century. It must be given high priority.

White LED lighting has three most important advantages: energy saving, environmental protection, and green lighting. Low power consumption: It is expected that white LED lighting, electricity consumption is 20% of incandescent lamps with the same illumination brightness, 50% of fluorescent lamps. According to statistics, in 1998, global lighting consumption was 230 billion US dollars, in the process of power generation, 4.1 Billion tons of CO 2 gas, US lighting electricity consumption of 63 billion US dollars, accounting for 20% of energy, generating U200 million tons of CO 2 gas in power generation, Japan, Taiwan region, 'similar statistics; environmental protection is mainly to reduce mercury pollution of fluorescent lamps and To this end, various developed countries have successively formulated national research projects. Such as Japan's "The Lighting for 21st Century" research and development plan. There are 13 companies and 4 universities participating in the program. The program is jointly implemented by Japan's "New Energy and Emerging Industrial Technology Development Organization" and the Japan Metal Research and Development Center, and is funded by the Ministry of International Trade and Industry of Japan. The US Department of Energy has established the National Research Programs Semiconductor Lighting Project (NationalResearch Programonsemiconductorlighting), which has 13 national priorities. The main problems are as follows: due to the large lattice mismatch and thermal stress mismatch between GaN and sapphire, A two-step growth method is generally employed, and the GaN and A1N overlayer methods are all Japanese patents. This causes misfit dislocations of 1019CnT3, which seriously degrades the crystal quality and affects the luminous efficiency of the LED.

Only mu sapphire is an insulator, and the resistivity at room temperature is greater than HViQcm, so that it is impossible to fabricate a vertical structure device, and generally only N-type and P-type electrodes can be fabricated on the upper surface of the epitaxial layer. Therefore, the effective light-emitting area is reduced, the lithography and etching processes in the device preparation are increased, the utilization rate of the material is lowered, and the cost is increased.

Due to the difficulty of P-type GaN doping, a method of preparing a metal transparent electrode on P-type GaN is generally used to diffuse current to achieve uniform illumination. This is also one of the most important basic patents of Japan Nichia Chemical Industry Co., Ltd. At the same time, the metal transparent electrode is generally due to the absorption loss of 3040 Â° / 5 light. Moreover, the preparation process is increased, the production cost is increased, and the product rate is lowered.

The sapphire hardness is too high, which is second only to diamond in natural materials, so it is difficult to cut during the manufacturing process.

The thermal conductivity of sapphire is not good, about 0.25W/cmK at 100*C, and in the application of GaN-based light-emitting devices, there is a strong thermal energy emission, which has a great influence on the performance of the base device. Especially in large-area high-power devices, the heat dissipation problem is very prominent. Lumileds's. Can improve material utilization, improve electrical performance, and reduce process complexity. At the same time, the method solves the problems of device cutting and cleavage of InGaNLD.

Comparison of two different process routes. Compared with the prior art, the use of laser stripping technology to prepare GaN-based LEDs requires two new processes, but can reduce 10 original processes, which is equivalent to reducing eight processes.

Reducing the process is equivalent to reducing material consumption, improving yield, reducing man-hours, saving personnel and reducing costs. In addition, since the sapphire substrate sheet can be reused, the cost of the epitaxial wafer is also reduced. Comprehensive evaluation can reduce the cost by about 50%. The equipment cost is also greatly reduced. Compared with the performance of the prior art method for preparing LED devices, there are advantages in the following aspects: 1) can improve light extraction efficiency, 2) heat dissipation performance is improved, and is suitable for high power devices, 3) eliminating mismatch pressure, spectral change Narrow, 4) conductive substrate is beneficial to eliminate electrostatic damage, 5) is conducive to packaging.

At present, we have peeled off the entire piece to obtain a lossless 2-inch epitaxial wafer, as shown. It is an electroluminescence photograph of the LED of the upper and lower electrodes.

Multi-die LEDs are packaged to enhance lighting brightness and make colorful lighting fixtures. At present, aluminum plate is used as the heat sink. At present, the prototype of the LED package bracket has been made. After the experiments of heat dissipation and light extraction efficiency are completed, the mold release and standardization process are started. High-density combined package power LEDs using conventional chips for high luminous flux.

5 Summary This paper focuses on the preliminary research work of laser stripping technology to prepare the upper and lower electrode LEDs, and in-depth research is still in progress. Research on phosphors and white LEDs has made great progress. Semiconductor lighting sources require high power, high brightness, and low cost. It is believed that with the support of national semiconductor lighting engineering, China's semiconductor LED lighting source will develop rapidly.

Fox Ear Headphones are the latest exclusive patented headphones designed by LINX Headphone Factory. On the basis of ordinary headphones, plus fox ears, it is more lovely. The fox ear emits colorful LED lights, and the lights can be freely controlled. There are 3 LED ways: flashing, LED always on and off.

3. Multiple colors, can be mixed batch.

5. Colors can be customized freely. 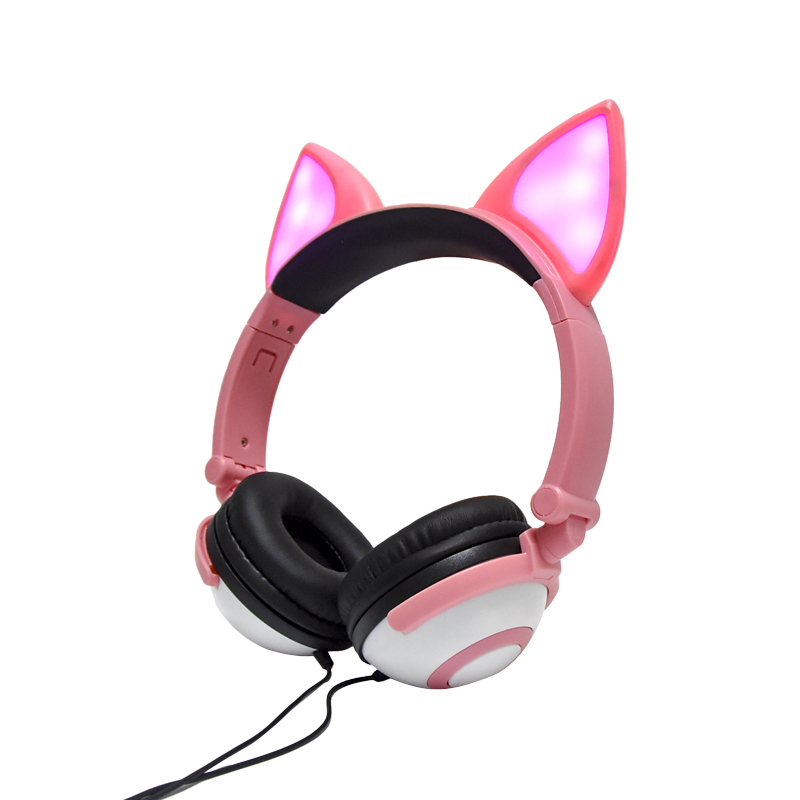