The brightness value L20(S) of tunnel tunnels as the most basic parameter of tunnel lighting design has been studied by researchers in many countries. Based on these studies, the recommended values â€‹â€‹for the brightness of the tunnel cavity are given. The recommended values â€‹â€‹for CIE and the EU for the brightness outside the tunnel are based on Postma's relevant records on daylight in the Netherlands. The UK's tunnel lighting standards for the regulation of the brightness outside the hole are based on Hunt's (1979) study of the frequency status of daylight illuminance at any time of the year. The external brightness value of the hole in the Japanese Tunnel Lighting Standard (JIS Z 9116-1990) is measured by Yoshikawa et al. for a typical highway tunnel in the central mountainous area of â€‹â€‹Japan for one year, giving the average brightness outside the hole.

China's research on tunnel lighting started late, and the experience and basic work were insufficient. The theoretical research is basically blank. The currently used "Tunnel Ventilation Lighting Design Specification (JTJ026. 1-1999)" is a direct reference to the CIE tunnel lighting guidelines and EU tunnel lighting standards. There is neither long-term observation data based on it, nor the actual light and climatic conditions and regional differences in China.

In order to fill this gap, in the late 1990s, the Chongqing Academy of Transportation Science conducted a measurement of the brightness outside the hole in Fujian through the environmental sketch method. In October 2001, the Shanghai Institute of Lighting and Lighting used the blackness method to test the tunnel entrance brightness of 10 tunnels in Fujian. From 2005 to 2006, Chongqing Transportation Research Institute used the digital camera on-site photo method to test and analyze the external brightness data of 32 tunnel openings in several highway sections of Fujian Province. However, since the test is limited to the province of Fujian, and the light environmental conditions in each tunnel test are highly random, it is impossible to express the difference in brightness outside the hole in different regions and different light and climatic conditions.

In order to obtain the brightness of the tunnel tunnel in different areas, it is necessary to test the brightness of the tunnel outside the tunnel in a large scale and for a long time, and it is possible to obtain representative and suitable brightness parameters in a certain area. At present, there is no such large amount of long-term hole brightness test data as the basis for setting standards. In fact, different geographical locations, different light and climatic conditions, and different materials and reflection properties of the hole elements have large differences in surface brightness values. China has a vast territory, a large geographical latitude span, and huge differences in light and climatic conditions. It is not rigorous to use local data as a national industry standard and norm.

Therefore, in order to obtain the brightness values â€‹â€‹of tunnels and external scenes that are in line with China's national conditions and reflect different light and climate differences in different regions, this paper proposes to use existing long-term observations of light and climate data based on light climate theory. To study the brightness of the tunneling scene. This kind of research method can make up for the insufficiency of the observation data and theoretical research of the brightness of the external scenery of the cave in China, and can also compensate for the accidental error caused by the random measurement.

The International Commission on Illumination clearly states in document CIE 88-2004: â€œIf the brightness of the entrance section is calculated using the highest brightness value appearing on the surface within the field of view, high inlet section illumination will be required. Therefore, it is proposed to appear at least 75 in a year. The highest brightness value of the hour is used as the calculation reference value..." This formulation is actually based on the concept of cumulative frequency. What is proposed in the CIE standard is not directly at the highest value for a particular time, but rather a larger value than a certain frequency of occurrence.

Based on the above point of view, starting from the actual needs of the project, the maximum brightness value of the cumulative appearance frequency of 75 hours is used as the standard reference value for determining the surface brightness of the cave exterior. Therefore, this paper determines the light climatic conditions corresponding to the maximum brightness value of the cumulative frequency of 75 hours as the reference reference climatic conditions for studying the brightness of tunneling objects. 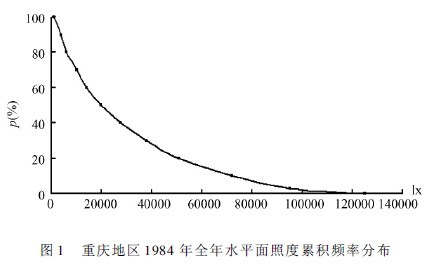 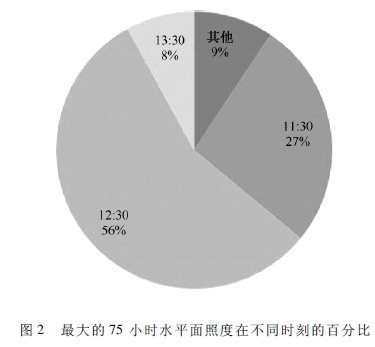 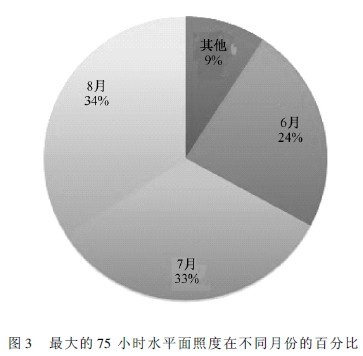 If you consider the seasonal distribution of the maximum 75 illuminance values, you can see from Figure 3 that all are in the warm half season. In June, July and August, it accounted for 91%, and the other 9% appeared in May and September. And the proportions appearing in June, July and August are relatively close, and are distributed approximately evenly in the summer of 3 months.

Cumulative appearance frequency reaches 75 hours of horizontal illuminance, that is, 75 maximum horizontal illuminance values â€‹â€‹greater than 97000lx, and the corresponding solar conditions are visible to the sun, 80% of which is Î¸2 and 20% of Î¸ is Î¸ . There is no case where the day is ÐŸ. This means: The maximum value of the water illuminance appears in the sunny state.

Based on the above analysis, the external brightness of the tunnel in Chongqing can be used to define the reference reference climatic conditions as: Sunny day at noon on the summer solstice, and the reference solar illuminance can be selected as 97000lx.

Further analysis of the light climate observation data of 13 other cities, the same conclusion is reached: The maximum horizontal illumination value of the cumulative frequency of 75 hours appears in the sunny day before and after the summer noon. It is only the maximum horizontal illumination value with a cumulative frequency of 75 hours, and there are differences in different regions.

Therefore, it is appropriate to use the maximum horizontal illuminance with a cumulative appearance frequency of 75 hours and the corresponding sky conditions as the reference reference climatic conditions for calculating the brightness of the tunnel tunnel exterior. The difference in light climate between different regions is reflected in the difference in the magnitude of the reference water level.